Archive for the tag “korea”

“I Do Not Have Gas!” And Other Highlights From Our Epic Trip to Korea

Seoul, Korea is an amazing place where strangers give your kids candy on the train and in no way is it creepy.  The people are genuinely nice… and fascinated by white kids.  Ours played their part well.

I note that Seoul is in South, vice North, Korea.  For the three months that led up to this trip a  certain member of my family may have accidentally mixed up these two countries and told her friends we were going to “North Korea.”  Slight mix up.

The trip was mostly amazing.  The kids gave us their fair share of “this is boring” and “when can we go back to the hotel.” Fortunately we combated this with new toys, orange sodas, and cake for lunch.

Here’s a breakdown of our epic week in Korea:

On the first day we went to the Korean War Museum.  I’m not much of a museum guy, but this place has real planes, tanks, and boats all over it.  The kids wanted to be in all kinds of pictures while climbing on all kinds of historically-preserved war artifacts.

They also insisted on taking some pictures themselves.  Either this will need more practice or our youngest got a great picture of the two people he cares about the most…

For lunch, we went authentic and ordered pizza.

We also went to a market where a woman who didn’t speak english communicated to us through a translator app.  At one point in the conversation, she held her phone up which proudly declared “I do not have gas!”  I can only hope thats what she was actually trying to tell us. 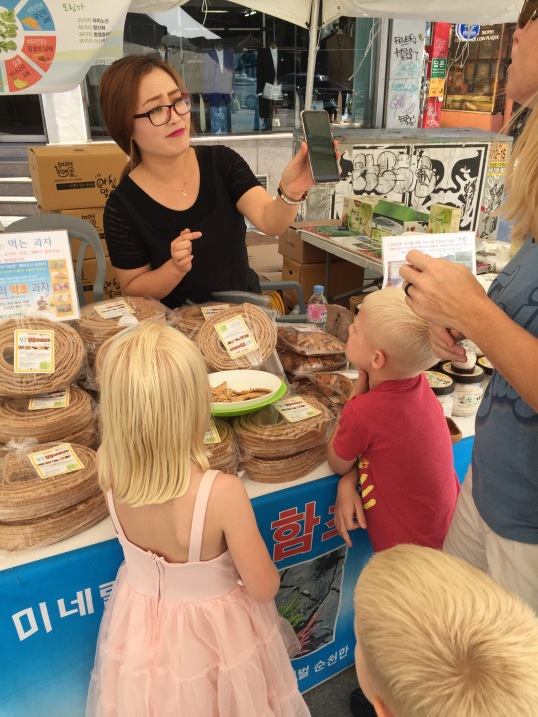 Hooray for no Gas!

It didn’t take long to discover that Koreans drive like legit maniacs.  Its not a stereotype, its just a fact.  Traffic lights seem to be more like “suggestions,” and even those don’t really apply to taxis and buses.  And I’ve concluded that people on mopeds in Korea are hoping to die because they commonly drive full speed into crowded intersections without regard for their safety.  Or anything.

On the second day we went big.  First, we went to this Korean Palace which dates back to the 1300s.  We didn’t take a guided tour, and I didn’t actually read much of the brochure, so I cannot tell you much about the palace other than it looks really, really cool.

It didn’t take long for the kids to start complaining about how they were bored, hot, and anxious to get back.  On our way out, a group of Koreans asked us to be in a video where we all said “welcome to Seoul.”  I’m still hoping to become YouTube famous, so naturally I agreed. 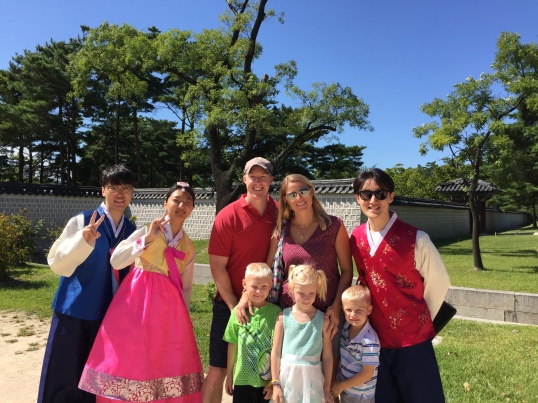 For lunch, we really channeled our inner-Koreans and ate pizza.  At the exact same pizza place we went to the day before.  Gettin real cultured.

In the afternoon we went to Seoul Tower, which offers the best views of Seoul in town.  We hitched a ride to the top.  They charged us about $30 for the whole family, and frankly I would have paid whatever they asked cuz it’s a ridiculously long way up.

While up there we ran into some women who wanted pictures with the kids.  Why of course…

That night, we went on a Han River Cruise, where you can see the Seoul skyline at night and then watch fireworks.  We almost missed the cruise, and everyone was super tired.  But we held it together (literally) and had a blast (figuratively).

I don’t like zoos.  There, I said it.  Zoos are not my thing.  Every time we go its hot and crowded and smelly.  But on the third day in Seoul we went to the Zoo.  We saw lions, tigers, seals, and lots of other zoo-worthy stuff.

Problem is, our youngest was hoping to see pigs.  When he discovered the zoo did not have pigs, he was sure to let us know he was having the “Worst. Day  Ever!”  And so he was.

But we didn’t want to see zebras…

Oh, and it turns out that I’m not the only dad who isn’t thrilled about the zoo.  I got a great pic of a dad fighting off sleep at the llama exhibit.  I’m right there with you, sir.

Here’s proof that some dad truths are universal

After the zoo we went to a marketplace in search of a Pokemon-inspired stuffed animal named “Psyduck.”  We didn’t find it, and this was devastating to our oldest.  He didn’t even need to say it.  We already knew it was the #worstdayever.

That night, shockingly, we ate pizza.  And made some new friends.   Not bad for the worst day of my son’s life.

The Photobomb that resulted in me looking super creepy

On the Fourth day we went to an indoor/outdoor amusement park called “Lotte World.”  On the way there our youngest made a friend on the train who wanted to get a picture.  He also invited our son to sit on his lap.  That wasn’t gonna happen, but they did have a great time. 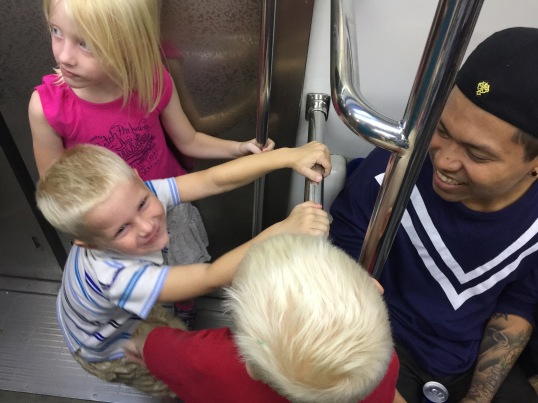 Lotte World is endless.  It’s a junior varsity version of Disneyland, but less crowded and mostly indoors, so the temperature is perfect.  They had quite a few rides all of the kids could enjoy.  The problem with this place is that waaaaayyy too many rides required extra money.   And here I thought America had a lock on the nickel and dime approach…

Oh, but great news!  Lotte World had the “Psyduck” our oldest had been looking for.  With all due respect to Disneyland, Lotte World may have been the happiest place on earth for this kid.

Welcome to the family, Psyduck

On the fifth day we went to the DMZ.  This is where the borders of North and South Korea meet.  With so much of the news revolving around N. Korea these days, this was great stuff to know and see. 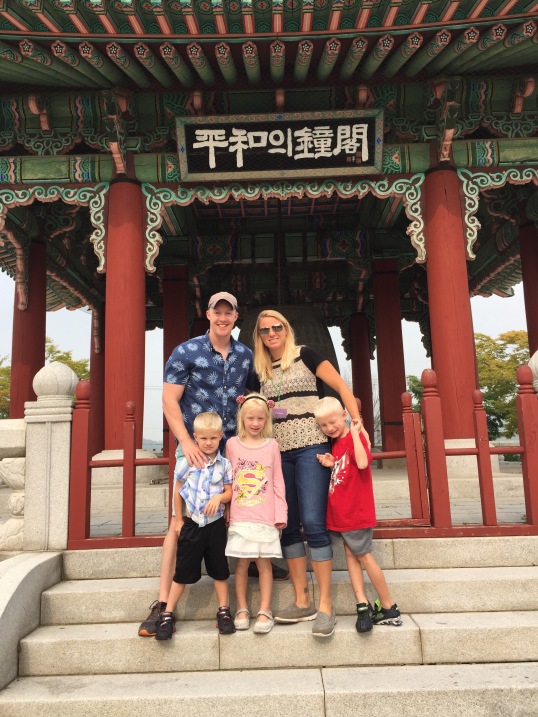 We went to a tunnel that was dug by the N. Koreans to invade Seoul back in the 70s.  We also went to an overlook where you can see the entirety of the DMZ.  I won’t say too much more about what we observed because last time Hollywood talked too much about North Korea they all got hacked.  I don’t feel like changing all my passwords, so instead I’ll just post this funny picture of our son… 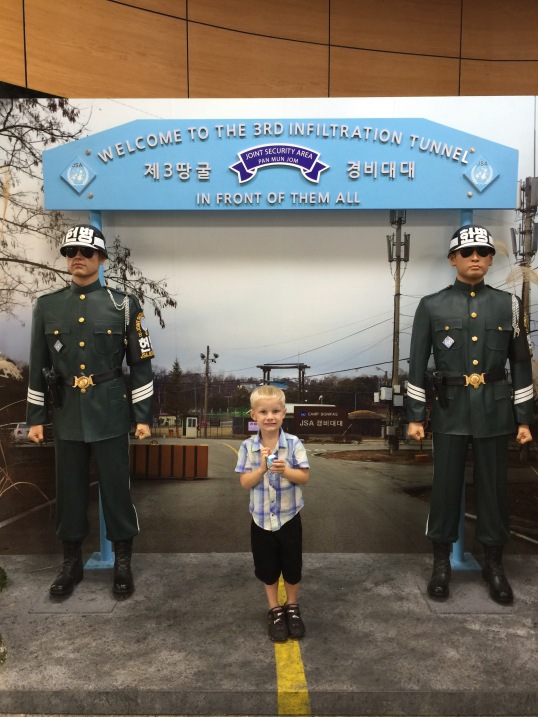 Our tour guide made some interesting observations.  She noted that tourism was way down because of “the Fat Man.”  Minutes later, she informs us that if North Korea launches a nuke at Seoul they will “all be dead in six minutes and there is nothing anyone can do about it.”

But she assured us that we were all safe…

The DMZ is a must see in Korea.  I knew nothing about the Korean War and had no legitimate background on what is inspiring current events until I went and saw it for myself.

On the sixth day we went to an “authentic Korean neighborhood” which is actually just a tourist trap filled with Starbucks Coffees and places to get fried chicken.  It’s not even worth my time to google the actual name of the place we went to.

While we were there, we stopped to eat outside someones house.  While we were eating, the owner invited us into his house, gave us water, and set us up at a table.  Super nice guy.  Of course we all had to get a picture.  Psyduck too…

The next day we went home.  Fully charged tablets made for an eventless plane ride.  Parents have it so easy these days.

The trip was eventful, and super fun.  Koreans are some of the nicest, most genuinely friendly people you will ever meet.  We left with fond memories, new friends, and of course, our main man “Psyduck.”

Also, in case you are wondering, I too do not have gas.