Archive for the tag “noahs ark”

Decorating A Baby Nursery (With Help From Top Gun)

When I first started this blog, my intended audience was other dudes who hadn’t had kids yet.  My goal was not to give advice, but to give warnings – all while speaking in a language that fellow cavemen would understand.  Well, women account for about 95% of my readership.  Turns out cavemen like reading about sports and other manly things.  Fair enough.

With that in mind, I’m about to ride this blog right into the Danger Zone, as before you is a post about how I decorated our baby nursery.  And because I don’t want to lose the precious few male readers I have, I’m going to dress this up with quotes from one of the manliest movies I can think of – Top Gun.
Note: I considered using quotes from an even manlier movie, Face/Off, but it turns out far too many of them contain the F word.  No dice.
I know what you’re probably thinking: mixing Top Gun quotes with a post about decorating a baby nursery is dangerous.  Well, you’re right, Ice…man. I am dangerous.
Let’s rewind about one year, shall we?  It was a time when Jackie was right in the thick of her pregnancy.  Aside from the occasional Chinese food run, I was utterly useless.  Eventually, the opportunity presented itself to do one productive thing, and that was design the baby nursery.  This was my shot to contribute.  There was no danger, so I took it.**
**Actually that’s false: this was a very dangerous operation.  The nursery was extremely important to Jackie, and if I screwed it up she would have had me flying a cargo plane full of rubber dog (poo) out of Hong Kong!
The first thing I needed was a theme for the room.  For people who are having boy-girl twins, this one is a no-brainer: Noah’s Ark!

Importantly, Noah brought along two of every unclean animal with him.  This is where twins and Noah’s Ark merge: two babies, two animals – obvious nursery theme.  Oh, and just so you know there’s also two “Os” in goose, boys…

I knew I wanted to make the bottom half of the room into the ocean, and that the ark would go somewhere above the cribs.  Beyond that, I needed ideas.  A Google search turned up hundreds of different designs…

Some were a little too cheesy:

Where are the unicorns?

And some were a little too…scary:

Not exactly the Titanic

Eventually, I stumbled upon a simple ark theme that wouldn’t give the babies nightmares. I decided to run with it.

At the time, the color of room was orange, so I primed it.  Then I began to trace the waves of the ocean on the wall.  This was where Jackie and I disagreed: she wanted perfectly uniform waves, and I wanted more spontaneous, random waves.  We debated for a good day or two over this.  Ultimately, I disregarded Jackie’s idea and went with mine…AND BROKE A MAJOR RULE OF ENGAGEMENT!

Once I had traced the waves onto the wall with a pencil, I painted the ocean and the sky with a big brush.  This covered the wall pretty good, but wasn’t as effective for the more detailed aspects of the design.  Ergo, I used a tiny brush to ensure the waves were nice and crisp.  I guess you could say I was too close for missiles, so I switched to guns.

Then I proceeded to draw the actual ark, which was trickier.  The ark I was going for had three layers, which I drew with a level.  The curves in the front and back of the ark had to be re-done many times, which was very time consuming.  In fact, one day I was playing beach volleyball in jean shorts and a sleeveless shirt (while listening to Kenny Loggins) but had to leave early so I could get home and keep working.  It’s true.

Once I finished painting the waves and the ark, I was feeling pretty good about the room. But then Jackie gently reminded me that there’s a rainbow in the Noah’s Ark story that just had to be included.**

** I’ll note that at the end of the story (featured in Genesis), there’s also a bit about Noah getting drunk and passing out naked in a tent.  For some reason, Jackie didn’t want that part of the story represented in the nursery…

So to recap: rainbow, in; drunk Noah sleeping naked in a tent, out.  Roger that.

Anyway, Jackie wanted the rainbow to be huge – spanning two walls.  The ark was gonna go over Jimmy’s crib, so this rainbow was Riley’s big feature.  When I told her how hard that would be, she said “Maverick, you big stud, paint the darn rainbow or lose me forever.”  Or words to that effect.

I thumb-tacked a piece of string to the wall, and drew a big semi-circle for the first ring of the rainbow.  Then I moved the same thumb tack up two inches on the wall, and drew another one.  I did this five times, and then painted the rainbow with five different colors.  You might be wondering what I was thinking at this point.  Let me just say that I didn’t have time to think up there. Indeed if you think, you’re dead.

Then came the clouds.  Sigh.  Clouds, oddly enough, are really hard to draw.  The clouds I originally painted looked really, really stupid.  I re-did them and they still looked stupid.  Several re-dos later and I finally got it down.  Unfortunately, the precise manner in which I completed the clouds is Top Secret. I could tell you exactly how I did it, but then I’d have to kill you.

At this point, the room looked pretty good but it needed animals.  Lots of animals.  That’s the whole point of the Noah’s Ark theme, right?  Well, we got some decals from Wal-Mart and placed them on the ark.  Then we got some stuffed animals and hung them on the wall.  Finally, the room was decorated.

But I wasn’t finished! Oh no…  I still had two cribs, a changing table, a rocking chair, and a dresser to assemble.  Doing all this would make any man lose that lovin’ feelin – I was no exception.  And let me just say that if I could communicate with the people who write the instructions for these things, I definitely would give them the bird.  You know, the finger.

The last touch was taking the remaining decals from the nursery and putting them in the bathroom.  It was a simple way to tie in the nursery theme to the bathroom.  Then, Jackie thanked me for my help, and told me I could be her wingman anytime.

(I think we all know what I said next…). 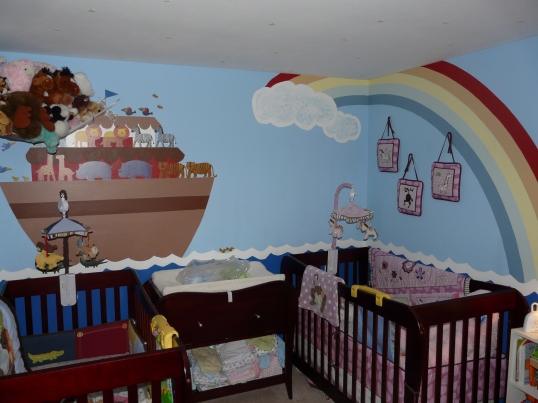 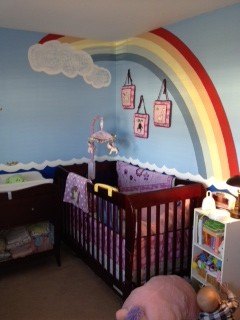 Why can't we just call it Noah's Boat?

While the room probably doesn’t win first prize, fortunately for me there’s a plaque for the alternates down in the ladies room.  I’ll take it.  Now it’s time to celebrate…

“Tower, this is Ghost Rider requesting a flyby.”