A Naughty and Nice List of Popular Christmas Songs

My wife thinks pretty much all Christmas music is great… which is pretty much 100% false.  Look, I hate to come across as a scrooge (especially after my last post), but my kids need to know that some of the most popular Yuletide carols are incurably cheesy, outdated, or downright confusing.

As a newly licensed attorney, I’ve done them a service and put some of the biggest Christmas hits on trial.  And I do solemnly affirm that what you are about to read is the truth, the whole truth, and nothing but…you know…the  truth.

Frosty the Snowman (every single version)

This one is no contest.  Indeed, there are certain Christmas songs that are terrible to me no matter who sings them.  When it comes to Frosty the Snowman, you could give Alicia Keys a piano and a full year to make this song easier to swallow and it still would go down about as well as a Cinnamon Challenge.  Which leaves me with one question: does anyone (besides my wife) actually like this song?  Be honest…

The Twelve Days of Christmas

“On the first day of Christmas my true love gave to me…” – ok, just stop right there.  See, to me this song is the Christmas equivalent of “99 Bottles of Beer on the Wall,” only more annoying because usually people who sing “99 Bottles” quit at about 97.  This song goes on for 12 grueling days, while my tolerance for it lasts about as long as I can hang with Crest Whitening Strips (which is like 3 days).  By the Fourth Day of Christmas? I might actually ask that you switch it back to Frosty the Snowman…

Verdict: Naughty on all 12 counts

Feliz Navidad (by that Puerto Rican guy who sings it)

Quick: name every single Christmas song sung in Spanish off the top of your head.  Ha, knew it.  This is the only one.  And I’ve only ever heard one version of it, too.  But the dude who sings this song sounds so genuinely happy to be wishing the listener a Merry Christmas from the bottom of his heart that it’s hard not to rock out to this one.  It’s a classic.

That “all the reindeer” just looooooved Rudolph after one foggy Christmas Eve is likely false.  In reality, Rudolph’s hero status probably lasted a few days (at most) until the in-crowd reindeer got jealous and started asking questions like “who does this Rudolph guy think he is?” I mean, did everyone at Hogwartz love Harry Potter just because he had special abilities?  Heck no, and in fact he spent his entire childhood fighting off haters because of them.  Which is why I might buy it if “some” of the reindeer loved Rudolph after his epic Christmas Eve performance, but I refuse to believe “all” of them did.

Proposed alternative ending: on the very last Christmas Eve of Rudolph’s eligibilty to guide the sleigh, Vixen starts a slow-clap “Rudy” chant that the entire North Pole gets into, which prompts a reluctant Santa to put him in with the rest of the squad.  Later, awesome orchestra music plays in the background as Rudolph is carried off the  snow.  Why not?

I’m Dreaming of a White Christmas (any version):

First off, the concept of a “white Christmas” is totally overrated.  Christmas is the 2nd busiest travel time of the year, so one person’s enjoyable White Christmas is another person’s cancelled flight – thanks a lot.  Second, snowstorms are awesome when they trigger school cancellations and telework policies.  Christmas Day?  We already have that one off, so any Nor’easter on that arrives with Santa is a wasted snow-day as far as I’m concerned.  Instead, why not dream of a “White Tuesday, January 23”, and roll MLK Day into a nice four-day weekend?

Walkin In a Winter Wonderland (any version):

Speaking of lyrics, these ones are downright confusing. First off, I don’t know who Parson Brown is, so I would have a hard time pretending that a snowman resembles him.  Secondly, as a kid I always thought they were saying “later on, welcome spider” (vice “we’ll conspire”).  Naturally, I had questions about why a spider would be featured in a Christmas song, but didn’t think too much of it because other random animals (i.e. the bluebird, the new bird, etc.) make cameo appearances in this one as well.

This song is usually good when the right person sings it (can we say Justin Bieber featuring Busta Rhymes???).  My only issue here is the notion that some ox and some lamb actually “kept time.”  I’ve always wanted to know: how exactly did they keep time, and why was it even necessary?  I mean, did Mary and Josph put this Drummer Boy on the clock or something?

One last question (well, two): if keeping time was such an important task (which I presume it was because it’s mentioned in this song), then why would it be delegated to an ox and a lamb when there were three perfectly qualified Wise Men standing right there?  Could this have been Bethlehem’s version of a quarterback controversy?  Clearly I can’t get past this!

There’s only one version of this song that I kind of like, and it’s the version featured in Home Alone that plays when Kevin McCallister tricks the evil Wet Bandits into thinking his family is celebrating Christmas at home (they were actually in France).   Big props for the life-size cutout of Michael Jordan featured in this scene.

Note: and speaking of life-size cutouts, am I to presume that these were the evolutionary precursor to the Fathead?  I mean, that would make sense…

All I Want For Christmas Is You (by, you guessed it, Mariah Carey)

A friend once told me he and one of his buddies listened to “All For You” by Janet Jackson on repeat for the entire duration of a road trip through the Midwest just to see if they could do it.  And because I’m a huge fan of awesomely terrible ideas, I hereby create the “All I Want For Christmas Is You” Challenge. To win, you must drive the longest distance in a car listening to nothing but this Mariah Carey gem on repeat.  Winner gets the special edition DVD of Love Actually!

Verdict: Nice the first few times, Naughty the next 1,582 times..

The Christmas Shoes (the one from that Lifetime movie…)

The only reason this song is on this list is because Hallmark/Lifetime Christmas Movie season is now upon us.  Having endured some of these movies myself, I note that while most of them have predictably happy endings, the movie “The Christmas Shoes” ends about as merrily as does “Titanic.”  Now, I’m not saying that any grown man would get emotional during either movie, but if you happen to head out of the room during the scene where the boy gives his dying mother the Christmas shoes he spent the whole movie trying to acquire, it might be for the best.  Of course, I made it through this scene with no problem.  I’m just saying that in case you happen to have that issue…

Verdict: Naughty (and this writer keeps his man-card)

Let’s end on a positive note, shall we? In my opinion, no song represents the true spirit of Christmas more than this one.  And like “Amazing Grace,” it’s one that will move me regardless of whether I’m having a great day or just watched a strand of lights on the top of the house go dark. Our church pastor does a pretty sweet rendition every year at our Christmas Eve service, but I challenge anyone to find a more awesome version than the one by David Phelps.   And if you do end up watching this video, PLEASE tell me you spy the amazing mustache-mullet combo in the background as an added bonus.   (Skip to about 1:30)

Well, that about wraps up my list (and yes, I’ve checked it twice).  Perhaps we’ll have to wait and see how some of these songs do on appeal.  In the meantime, I want to assure my kids that it’s ok to enjoy lots of seasonal music this time of year.  It’s just that if they’re going to listen to Christmas music, then those songs had better be good… for goodness sake. 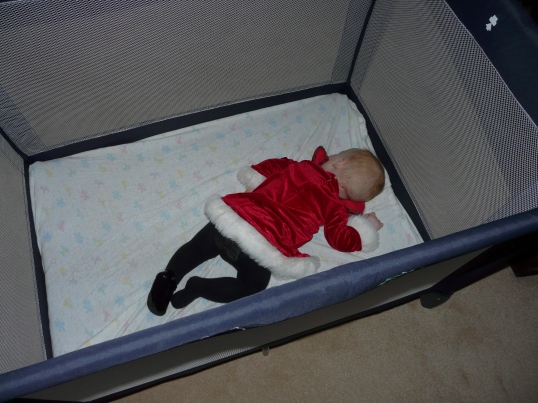 Definitely not dreaming of a white Christmas…