What My Wife Means When She Says “Daddy’s Coming” 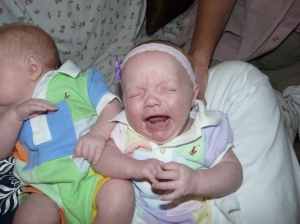 With twin babies around, there’s a lot of screaming that goes on in our house.  It’s just a fact.  So naturally, my wife and I try to comfort our children as often as possible.

One way I like to do this is by reassuring the children that “Daddy’s coming.”  Here’s how it works:

Me: “Don’t worry, Riley.  Daddy’s coming with your bottle”

Of course, this is totally ineffective.  It literally doesn’t do a thing. Riley really doesn’t care that I’m “trying my hardest” and “going as fast as I can.”  She wants food.  Nonetheless, it makes *me* feel better about the fact that my child is screaming and I am busy making her a bottle.

But the phrase “daddy’s coming” takes on a whole new meaning when mommy is the one who says it.  Let me demonstrate:

My wife: “You getting hungry Riley?  Don’t worry, daddy’s coming with your bottle.”

My wife: “I know youre hungry, sweetheart.  Daddy’s coming”

Now, let’s just take a second to break this situation down.  See, up to this point, you could say that my wife is letting little Riley know that she need not worry.  After all, “daddy’s coming.” Right?

Here’s what’s really going on: when my wife tells the kids that “daddy’s coming,” she isn’t reassuring the kids about anything.  In fact, she isnt even talking to them.  She’s talking to me.

And what is she telling me?  Well, she’s telling me to HURRY THE HECK UP!

Which is why 30 seconds later (while I’m still making the bottle), my wife’s voice raises a few levels.  Now, I hear something like this:

“I know youre so, so hungry, Riley.  DADDY’S COMING I PROMISE!”

Notice, this is a two-tiered attempt to get me to hustle.  She begins with a guilt trip.  Indeed, my daughter is “so, so hungry” and there I am taking my time while she suffers.

The second part is a more direct approach. “DADDY’S COMING I PROMISE” is a polite way of telling me I better freaking hurry up before things hit the fan. Notice, 100% of that statement was directed toward me; 0% of that was to reassure little Riley.

In some respects, it’s ironic that the name of this blog is “Hold On Daddy’s Coming.”  You would think that it’s something I say all the time (I do say it from time to time).  Actually, it’s something my wife says – ALL. THE. TIME.  And when she says it, it means something totally different than when I say it.

Dudes out there, know this:  your wife is sneaky.  And now that she’s a mom, she’s even sneakier.  So don’t be fooled. When she tells your child that “daddy’s coming,” know that she wasn’t even talking to your child in the first place.

Nope, she was talking to you!

Posted in Stuff My Wife Says